In this article we are going to describe features of NR-400 router supporting two SIM cards, its advantages and reasons why you should consider this router if you need a stable internet connection.

Last year I tested 3G/4G routers for a country house and a lot of people found this topic interesting. After those tests I installed one router in my car in order to have a stable internet connection while traveling, but still, I think that a stable internet connection at home is a priority. At the end of the last year I saw that on the market there were two SIM 3G/4G routers made in Russia. And they did not represent just USB modem based items, but fully functional Linux based devices. I purchased one, tested it during a month and I would like to share the results of my observations. As usual, I took pictures for those who do not like reading.

Why do we need 2 SIM cards?

This question is similar to the question asked by iphone owners to those who prefer android devices having two SIM cards. The response is clear and simple: two SIM cards allow you to use services rendered by two operators and choose the best price/speed. Moreover, this significantly enhances the reliability: when one operator’s base station fails or you run out of money on your account, the router will switch to a spare operator and you will have uninterruptable network access. Finally, two SIM cards facilitate and accelerate the selection of an operator in a particular area if an external antenna installed on a mast is used: in order not to remove the antenna and router each time or in order not to switch off the router and change a SIM each time, you may switch to another operator’s SIM using software and continue setting your antenna.

How does it work?

The router which I took was made by Microdrive, a Russian manufacturer, as an OEM board — Tandem-4GS-OEM, but I asked to deliver the router in a sealed enclosure as soon as the router is installed in the roof space right near the antenna. 3 m cable assembly allowed me to install the router in rather god ambient conditions, but that does not impair the signal level. Later on I would like to transfer the outer directly to the antenna, thus removing the cable assembly and enhancing connection parameters. 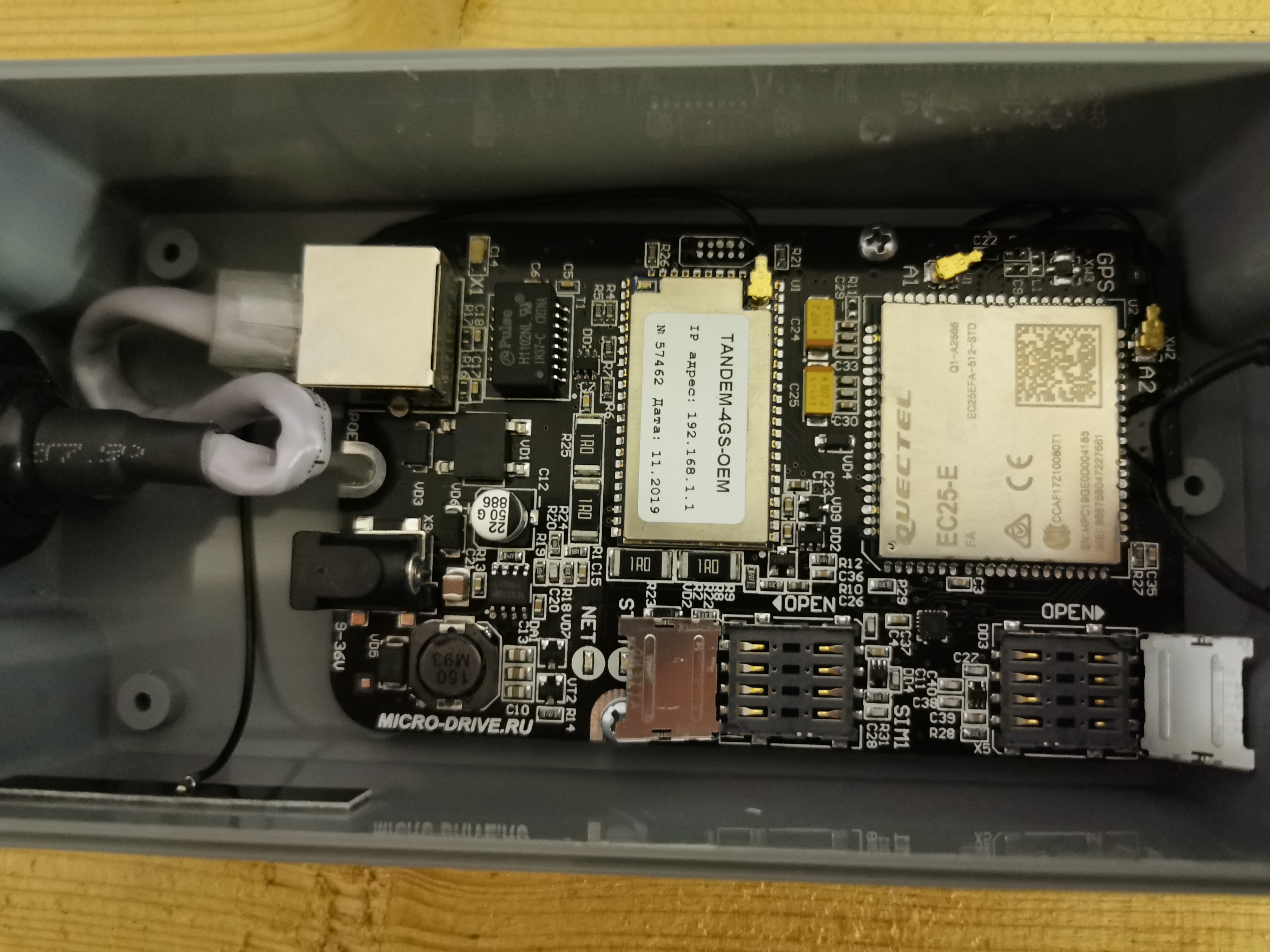 The router itself represents a board on which all elements are installed and pigtails of the external
antenna and router’s own Wi-Fi antenna are connected. Among interfaces there is an Ethernet connector for 100 Mbit/s supporting PoE and a connector to connect an external power adapter. Power supply to the board may be 9 to 36 V; that means that the router can be easily used in a car, in a truck having 24V, or in homemade systems having 12-24V power supply. The most convenient thing is that such a router may operate with a conventional automobile gel battery of sufficient capacity to support the operation without an external power source for some days. That is, even if an external network is off, when you have an uninterruptible power supply without inverter, you can connect the router directly to the battery and remain connected to the Internet. 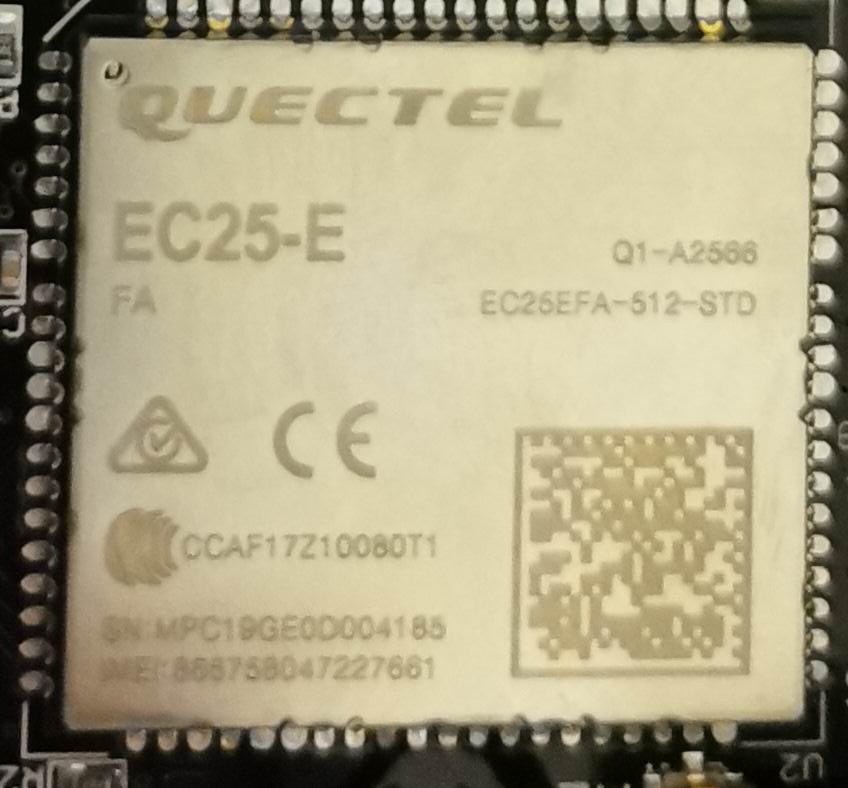 Now let’s speak about the router specifications. In the picture you can see that Quectel EC25-E chip
is responsible for connection to the operator. From ТТХ module on the manufacturer’s site it is seen that it supports 2G/3G/4G(LTE) technologies; moreover, LTE of Cat.4 is supported; that provides maximum available download speed up to 150 Mbit/s, and output up to 50 Mbit/s. At the same time, the board has 100 Mbit/s Ethernet interface, which means that, in any case, we will face the wired connection output capacity, but I am going to turn back to it later. It is important that this module has a very high sensitivity and can operate even at a very low signal to -110 dBm in 3G networks. That means that this router will allow you to connect to the network even at a very low signal level and at a very long distance from the base station. Since this year the manufacturer switched to Quectel EC25-EU chips having better sensitivity characteristics. To enhance a weak signal please use my antenna test. 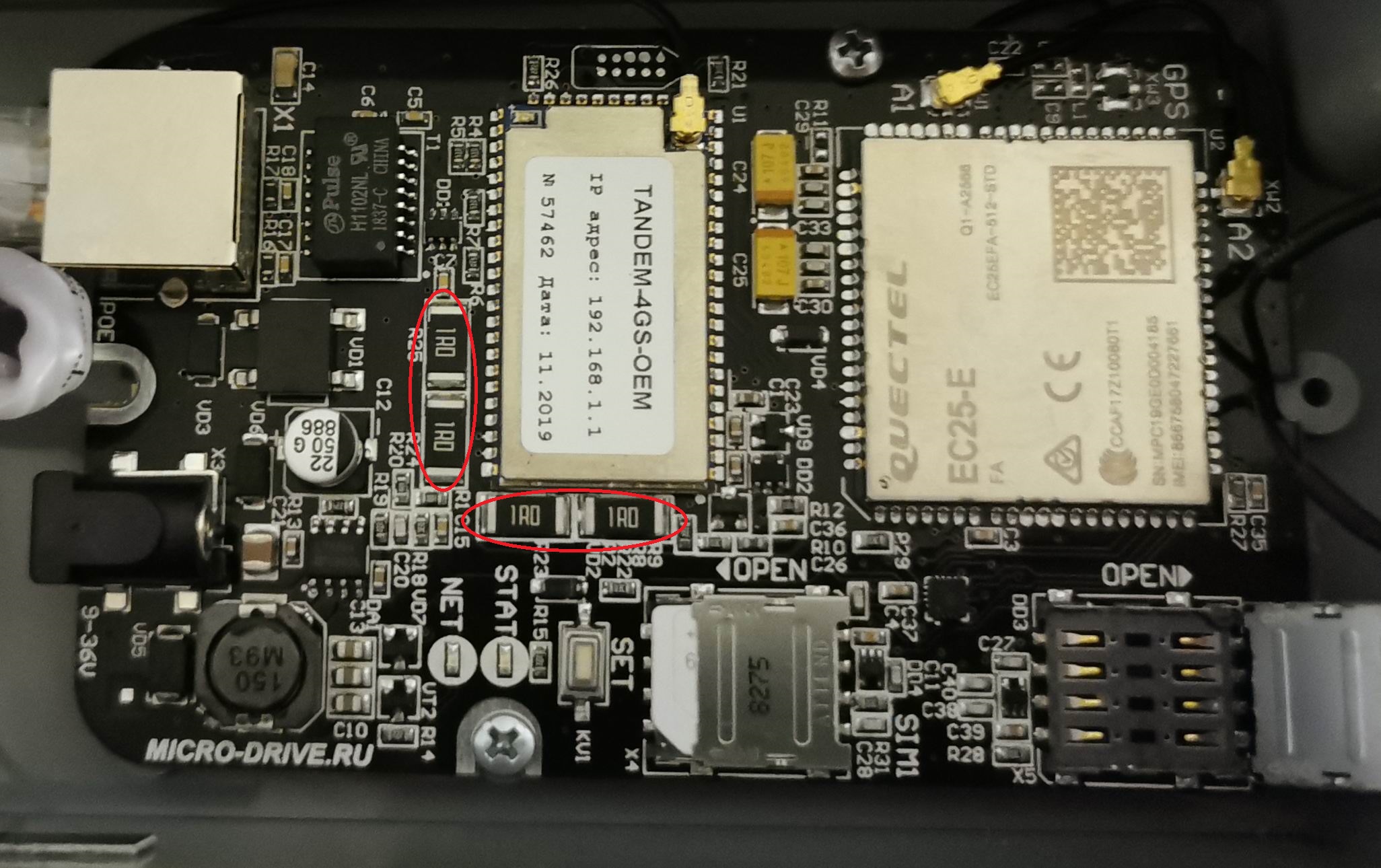 The device is designed to be installed indoor as well as outdoor in a sealed enclosure. To easy start the router at very low ambient temperatures, the router has a heating system: there are 4 resistors (circled red) on the board; they heat up the board and surrounding elements before the start. The manufacturer guarantees the router operation event at ambient temperature equal to -40 degrees. The heating switches on itself when the router is started if the board temperature is below -18 degrees and switches off when the temperature reaches -15. Later on, the board successfully operates due to self-heating as a result of the operation of chips.

The router has a 2.4 GHz Wi-Fi module with a good level of signal and wide coverage, but you should not expect high speed from it. When I connected a notebook having a channel speed up to 150 Mbit/s, I could not get more than 55 Mbit/s during downloading. However, this speed is rather sufficient for comfortable surfing and viewing videos without any suspension. If you wish to have full speed, cable connection is definitely better.

A significant advantage which is important for those who use smartphone unlimited internet is a possibility to have some options, such as: IMEI change and TTL value adjustment. However, as soon as this is regarded as a violation of mobile service plan use, such options are at your risk. The information concerning such changes can be easily found in internet, but I have not mentioned that.

Do I need a router having two SIM cards? Yes I do, actually. Despite the fact that I live just 5 km away from a big city, none of 9 surveyed providers agreed to lay an optic cable to me or create a radio linkup; therefore, only mobile internet is available. I acquired PRISMA 3G/4G MIMO, a good directional antenna with amplification up to 27 dB, and can readily recommend it to everybody who wants to have good speed in case of rather long distance from the operator’s base station. As I mentioned in the very beginning, my router was located in the unheated roof space and, to change the operator, I had to go there, to uncomfortable environment, and change SIM cards with freezing hands. And what about communication channel reservation? After a strong thunder-storm in autumn, Yota operator (Magafon) stopped data communication on the tower for almost a full working day, although the connection to the base station was available. At the same time, Beeline tower worked well. I was fortunate because towers of different operators were located in the same direction, even if, according to the router, they were not far one from another, and I did not have to reset the antenna.

The screenshot demonstrates well that Wifire operator (Megafon based) uses 20 MHz wide channel and provides data communication speed of 80-90 Mbit/s; at the same time, ping to ya.ru server is at the level of 60-80 ms. Beeline operator uses 120 MHz wide channel and provides download speed of 35-40 Mbit/s and pings to ya.ru server about 30-40 ms. That is, in addition to reservation, when you need to download a big amount of information, it is more convenient to switch to Wifire, and, when you want to play online, it is better to switch to Beeline that has a lower response time.

In addition to this, the router has perfectly built logics of switching to the second SIM card.
Moreover, the router periodically pings itself the specified hosts to check for connection availability; you may set the event condition based on the absence of connection. For instance, the router may, instead of switching to another SIM card, restart the current connection. Or after switching to the second SIM card, it may work with it for a specified time in the range of 1 to 20000 minutes and turn back to the first SIM card. This is done so that when the first operator’s connection is recovered, the router can turn back to it automatically. For example, the second SIM card use may be paid based on the amount of megabits used, and the first SIM card may serve for unlimited internet access. However, when the connection availability is critical, you may use megabit-based payment service plan for a certain period of time and turn back to unlimited internet afterwards.

So, the issue of redundancy is solved, which is critical in mobile points (online cash desks, terminals) as well as in fixed points (cash desks at filling stations, ATMs, private houses, security systems with Internet communication).

I should particularly mention a short switching time to the second SIM card, which takes 3 to 10 seconds. I noticed that switching from SIM 1 to SIM 2 occurs almost immediately, whereas switching from SIM 2 to SIM 1 takes a little longer; however, YouTube video remains uninterrupted in both cases.

At the moment of making the video, the router uptime was 26 days. This is despite the fact that the router itself switched to the redundant SIM several times and I switched it manually to play with lower pings. The router works well in the unheated roof space, despite the ambient temperature about -5 degrees. Our winter was not very cold, and, over the last month, I did not see any sign of connection interruption or failure. It is good that the manufacturer supplies the board separately, not making us buy any additional devices. At the same time, you can separately buy a box antenna with a compartment to install the router and install the router there. There is even a "city" version of the NR-400 router with embedded antennas, designed to be taken outside by laying an Ethernet cable. Since the communication quality level in the city is much higher, there is no need to install a directional antenna, and the signal level will be sufficient for convenient operation within the network. Before this, I had to use a USB modem in Keenetic router as redundant or learn to configure Mikrotik to reserve a channel with a second device; now, it is enough to have one device with a pair of SIM cards.
If you have any questions do not hesitate to ask me and I will give you the answers in the Comments. I am always ready for new tests if anybody wants to check the device operatio

Telegram Write in the messenger